No roast potatoes for Maxwell

Ghislaine Maxwell will receive an alternative to the typical Christmas dinner while behind bars.

END_OF_DOCUMENT_TOKEN_TO_BE_REPLACED

While we are tucking into Turkey and mountains of roast potatoes, Maxwell will reportedly be dining on quite the opposite.

According to the Telegraph, the 59-year-old will be served-up beef meatloaf, gravy, mashed potatoes, tuna, potato chips, and fresh fruit.

Maxwell, who is no stranger to complaining about her life behind bars, has previously slammed her treatment. END_OF_DOCUMENT_TOKEN_TO_BE_REPLACED

"I think she has suffered some occasional physical abuse at the hands of her guards. Yes."

He continued to explain that his family planned to make a legal challenge case under human rights legislation.

He added: "We are going to take it to the UN. 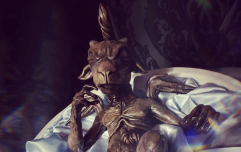 END_OF_DOCUMENT_TOKEN_TO_BE_REPLACED

"Take it from me. America has to be held to account, and it will be."

In response, a representative for the US Federal Bureau of Prisons said: "We are committed to ensuring the safety and security of all inmates in our population, our staff, and the public.

"The BOP takes allegations of staff misconduct seriously and consistent with national policy, refers all allegations for investigation, if warranted."

Despite Maxwell's denial of any wrongdoing, victims of Jeffery Epstein have come forward to brand her a "monster in designer clothes".

popular
Moment parents beg police to stop Texas gunman as cops stood outside school during shooting
Japanese man spends £12,480 to look like a border collie - and it kind of works
Ricky Gervais finally says what we're all thinking about the Johnny Depp Amber Heard case
John Terry hits back at Rio Ferdinand over Premier League ranking
Maro Itoje explains why he will no longer sing England rugby anthem
Witness testifies receiving tip-off for photo-op of Amber Heard's alleged Johnny Depp bruise
Amber Heard appears 'distraught' as court hears explicit Johnny Depp text message
You may also like
Entertainment
The JOE Entertainment Quiz Of The Year
Entertainment
Mrs Brown's Boys: In defence of one of the most divisive shows on TV
Sport
12 sports documentaries you need to watch this Christmas
Sport
The best and worst Premier League managers to spend Christmas day with
Entertainment
Christmas TV: The ultimate guide to the best movies and shows this festive season
Next Page