Gary Neville and Jamie Carragher used their platform expertly to slam Boris Johnson by mocking his comments about attending, what he thought, was a 'work event.' 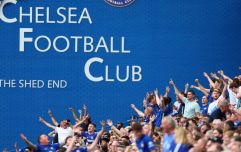 END_OF_DOCUMENT_TOKEN_TO_BE_REPLACED

The prime minister has made more headlines after further reports of boozy parties were revealed, including ones that Johnson attended, during the height of lockdown and the Sky Sports duo weren't going to let him forget his errors.

Speaking during the intro of the Friday Night Football programme ahead of Brighton & Hove Albion's game against arch rivals Crystal Palace, they were discussing the importance of the game.

Neville, who has been actively critical of the government's failures, started off the jokes by comparing the atmosphere to a "party" before Carragher chirped in with a witty response.

"Let's be straight though," he said.

END_OF_DOCUMENT_TOKEN_TO_BE_REPLACED

"This is not a party tonight, this is about work.

"If you speak to Graham Potter, Patrick Vieira, there's 22 players on the pitch. They've got to know the difference between work and a party.

"If they get that wrong, or think they're in party mode, they're going to be in big big trouble."

The response was met with laughter from both Neville and presenter David Jones who exclaimed "It feels like a political broadcast" before Neville then told Carragher that "Sue Gray will decide that."

END_OF_DOCUMENT_TOKEN_TO_BE_REPLACED

Getting one last jibe in, the former Liverpool defender pointed to the screen and shouted "we're watching you, prime minister."

The mockery comes on the same day Downing Street publicly apologised to the Queen after even more damning evidence revealed that boozy parties were held on the eve of Prince Philip's funeral, in which the Queen was forced to sit alone due to Covid-19 restrictions in place at the time.

Neville himself had also made headlines earlier on Friday after he announced he had officially joined the Labour Party and taken his first steps into politics after publicly showing his support on social media on many occasions in the past.