When the year began, we'd be lying if we said we expected Gary Lineker to be one of the few mainstream voices standing up against racism.

But 2016 has been a very strange year indeed, and - in a climate that has brought us Brexit, the election of Donald Trump and accusations of the BBC pandering to fascism - the former footballer is a rare voice of reason.

END_OF_DOCUMENT_TOKEN_TO_BE_REPLACED

The Match of the Day anchor has spoken out against some vile front-page rhetoric, questioning how far the UK has fallen in its attitudes towards refugees and anyone who isn't British.

And now he has become one of the first to speak out after UKIP leader Nigel Farage spoke of 'That Obama creature – a loathsome individual who couldn’t stand our country'.

Lineker pinpointed the use of 'creature' - dehumanising and racially-charged language used against the United States' first black president - in Farage's TalkRadio interview following the election of Donald Trump as Obama's successor.

I don't suppose Farage calling President Obama a 'creature' is in any way racist? 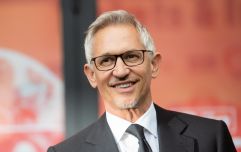 END_OF_DOCUMENT_TOKEN_TO_BE_REPLACED

Others have quickly followed Lineker's example, pointing out that likening a black man to an animal is one of the oldest racist tropes around.

As some have pointed out, the statement carries these intonations even without Farage's years of anti-immigrant rhetoric. And yet there are still people who, for whatever reason, have decided Lineker is 'the real racist'.

+Farage talks about the outgoing president in dehumanising terms. His latest is 'the Obama creature.' Reverting to 19th racist terminology

I'm glad that if I say that calling Obama a "creature" is racist, 2000 white men will go to war with me over it online

Still telling me he isn't racist?

@NigelFarage describes Obama as a "loathsome creature". He really is desperate for a job with Trump isn't he. The racist little shit.

I see Lineker's mentions are full of people calling him a racist for suggesting that Farage's "creature" comment is racist.

popular
Love Island extended tonight for ‘most dramatic and explosive Casa Amor ending' in show history
Dad who left partner for Ukrainian refugee is now her full-time carer after she became partially blind
Chelsea set to hijack Frenkie de Jong deal, offering two players plus cash
British Airways jet catches fire as passengers and crew are evacuated after flight from London
Premier League club faces call to suspend international player over rape allegations
Boris Johnson says he is 'so sad to give up the best job in the world'
‘Bye, bye Boris’ song playing in the background of PM’s resignation speech is the finale we all needed
You may also like
Sport
Gary Lineker issues cryptic response to James Corden Match of the Day rumours
Sport
Gary Neville criticises 'tone deaf' Man Utd players for going on 'global tour' following defeats
Sport
Oleksandr Zinchenko breaks down in tears during emotional interview on Ukraine
Sport
Lineker and Shearer defend Lukaku after seven-touch disasterclass against Crystal Palace
News
Gary Lineker responds to Tory MP who wants God Save The Queen played nightly on BBC
Next Page