Freak result on the National Lottery has left some winners shortchanged

Fifteen quid. That's about the price of a decent Nando's meal.

It's also the disappointing winnings some National Lottery winners came away with thanks to a weird quirk on last night's draw. 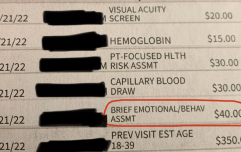 END_OF_DOCUMENT_TOKEN_TO_BE_REPLACED

Lotto ticket winners who matched five numbers from this week's draw only came away with £15.

The winnings for matching three numbers in that draw? £25.

Five ball winners came away shortchanged due to the commonality of the winning numbers. A Camelot spokesperson said: "We had an unprecedented 4,082 Match 5 winners tonight.

As you can imagine, the "lucky" five-ball winners were somewhat miffed, and vented their anger on Twitter$.

So getting 5 numbers in the national lottery tonight bagged you £15 but 3 numbers got you £25......#thenationallotteryrobbery

"It is a lottery at the end of the day, and is down to the numbers drawn and the number of people who match with those numbers" said the Camelot spokesperson.  "As a result, we do sometimes see unusual situations like this."

Still, an extra £15 in your pocket isn't so bad. You can get yourself a decent cinema ticket with it.

Or maybe a few tickets for this Saturday's draw, which has a jackpot of £28.2m.