Flight forced to turn around after mother forgets baby at airport

A plane flying from Saudi Arabia for Malaysia was forced to turn around after a woman realised that she had forgotten her baby at the airport. 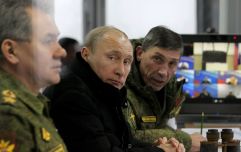 END_OF_DOCUMENT_TOKEN_TO_BE_REPLACED

In what may end up being the inspiration for the next iteration of Home Alone, video footage of the pilot explaining the unusual incident to air traffic controllers shows him asking if he has permission to turn the plane around and retrieve the child.

He had been made aware of the baby after its mother told flight attendants.

"May God be with us. Can we come back?" he is heard asking air traffic controllers, who are then heard discussing the bizarre request.

Another person can then be heard saying: "This flight is requesting to come back. A passenger forgot her baby in the waiting area, the poor thing."

END_OF_DOCUMENT_TOKEN_TO_BE_REPLACED

"I told you, a passenger has left her baby in the terminal and she is refusing to continue the flight," the pilot then repeats to colleagues.

After a pause, air traffic controllers can be heard giving the green light for the pilot to turn around.

"OK, head back to the gate. This is totally a new one for us."

The mother and baby were reunited at the airport, but we are yet to find if the child in question got involved in the sort of hi-jinx that would merit a feature-length film.