A fire has broken out at the Estadi Nacional ahead of Andorra's World Cup qualifier against England on Saturday. 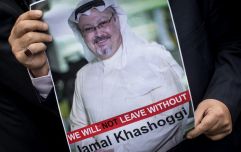 END_OF_DOCUMENT_TOKEN_TO_BE_REPLACED

It is thought that the fire was caused as a result of somebody welding a metal structure at the stadium prior to tomorrow's Group I clash between Andorra and the Three Lions.

The area affected by the fire is the commentary gantry, which is where the commentators would usually sit during the match. It is also where the main match camera would be situated.

The footage also appears to show the pitchside VAR monitor on fire.

BREAKING: A fire has broken out at the Estadi Nacional, where Andorra are set to play England in Saturday's World Cup qualifier. pic.twitter.com/RTG64JhfUl

It is believed that nobody has been injured as a result of the incident, with England's players and staff at their hotel whilst the fire broke out.

Firefighters were quickly in attendance and were able to contain the fire.

However, as the playing surface is a synthetic 3G pitch, there are worries that the heat and flames could have damaged the pitch.

It is unconfirmed whether or not the fire will have any impact on tomorrow's game going ahead.