Finally, KFC is launching a breakfast menu in the UK

McDonald's does it. Burger King does it. Even Greggs does it. But up until now, KFC haven't offered breakfast in the UK.

Fear not though, chicken fans, because as of Monday October 10, KFC will be offering a breakfast menu in 10 locations across the UK. 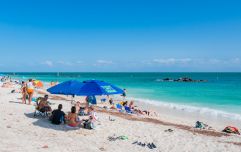 Holidays are back on the cards - but can we afford them?

END_OF_DOCUMENT_TOKEN_TO_BE_REPLACED

The new menu features the new Chicken AM, a chicken burger with egg, cheese and smoked bacon. Other options include a bacon roll, along with a bacon and egg roll. If you fancy making a meal out of it, you can add a hash brown and a coffee for a little extra.

The KFC Double Down - not the Chicken AM, but not far off either. Photo: Michael Saechang

Breakfast is served from 6am until 10:30am, and if the thought of fried chicken for breakfast seems weird, you've clearly never been hungover before.

So where can you get a KFC breakfast? These are all the locations that will be open for business on Monday morning:

Hopefully KFC breakfast is a runaway success, then everyone can revel in the majesty of fried chicken in the morning. Beats a bowl of bran flakes, anyway.