Be warned: Watching this will make your toes curl in embarrassment.

If you didn't know, Pegida (a Germanic acronym for Patriotic Europeans against Islamisation of the Occident) is an extreme far-right organisation founded in Germany that vows to fight what it see as Islam's threat to the West. They do this by using intimidatory tactics to pedal hate and fear. 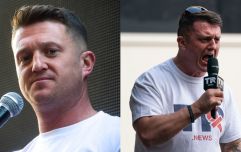 Syrian teen suing Tommy Robinson seeks up to £190,000 in damages

END_OF_DOCUMENT_TOKEN_TO_BE_REPLACED

Former EDL member Tommy Robinson has started a British arm of the group, calling itself Pegida UK, and installed 'Tim' as the new leader. Tim is a former British soldier who agreed to appear on Channel 4 News to talk about the aims and objectives of Pegida UK.

But perhaps Tim (in the course of the interview we find out his second name is Scott) now wished he hadn't, because the short interview is pure car crash telly. Scott comes across as confused, suspect and utterly clueless. In fact, you'd be forgiven for thinking he was a parody.

Check it out for yourself - and try not to imagine it's a David Brent-style p*sstake...

Indeed it brings to mind the infamous 'Muslamic Ray Guns' rant by this EDL member...

popular
Insulate Britain protester says 'she'll cry' if anyone dies as a result of M25 action today
Vegan installs hand sanitiser dispenser ‘full of blood’ outside butchers
Forensic pathologist explains how Brian Laundrie's body skeletonised so quickly
Radio presenter tells Insulate Britain protestor cement grows on trees
How did Brian Laundrie’s parents find his remains in a few hours?
Squid Game creator says Netflix 'never gave him bonus' despite show making £650m
Insulate Britain wants people to not use the M25 today so they can protest on it
You may also like
News
Counterpunch: Inside the antifa fight club training to combat the far-right
News
Tommy Robinson will face another contempt of court trial
Politics
Man creates EDL parody, gets Tommy Robinson to endorse it
News
Court of Appeal overturns Tommy Robinson charges
Politics
Speaking to the man who went 'undercover as a racist' at an EDL march
Next Page