The protests in Hamburg, Germany are no laughing matter.

Seventy-six police officers have been injured with three taken to hospital, with protesters also reportedly injured in clashes on the streets of the city hosting the G20.

Around 15,000 police have been deployed as the violence escalated; cars have been set on fire and shop windows smashed. Peaceful protests have also taken place, but they have largely been overshadowed by chaos and tension between protesters and police.

World leaders including Donald Trump, Theresa May, Angela Merkel and Vladimir Putin are meeting to discuss a number of global issues, including terrorism, global warming and free trade. Meanwhile, on the streets, police fired water cannons and used pepper spray on protesters to try and take control of the situation.


But amongst the protests, a magical sight was caught on camera: a pizza delivery guy driving a moped through the crowd. 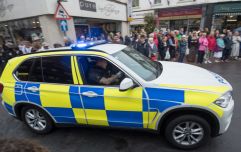 Someone phoned 999 after discovering mushrooms on their pizza

END_OF_DOCUMENT_TOKEN_TO_BE_REPLACED

Caught on camera by Reddit user coolsubmission, the video shows the heroic pizza dude driving through the crowds of protesters, presumably out making a delivery, or perhaps just trying to get where he's going.

Employee of the Month, by a country mile. Give that man a raise.