Cheeky Nando's forced to apologise for flirting with customer on Twitter

The restaurant got into a back-and-forth with a female customer who had commented on how hot the chicken was.

You can probably see where this is going.

The company brought customer engagement to a new level by asking 'Elle' to DM them her address, where they would test how much heat she could handle. 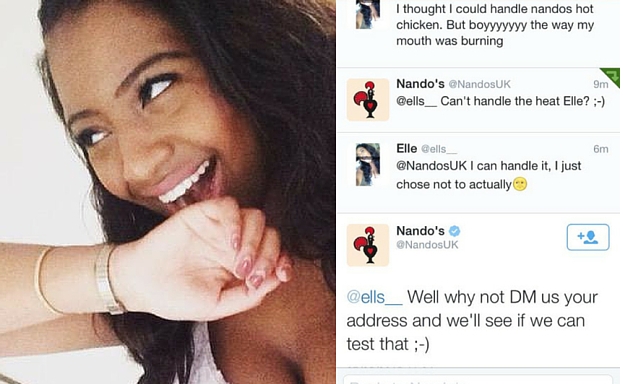 People love nothing more than to be outraged, of course, so the chain was forced to delete the tweet and claim it was all an innocent misunderstanding.

"We like to have fun with our customers on Twitter and reward our loyal fans," a spokesperson told The Telegraph.

"We wanted to send Elle a bottle of hot sauce in response to her tweet, which is where the reference to ‘handling the heat’ comes from.

"We would never intentionally offend someone and when we realised we may have done so, deleted the tweet. This is not something we would usually do."

popular
How did Brian Laundrie’s parents find his remains in a few hours?
Taliban 'behead junior volleyball player and post photos of her head on social media', report says
St James' Park to get new name under Newcastle new owners
The JOE Friday Pub Quiz: Week 266
Real life Squid Game coming to UK and you have to sign a 'medical disclosure' to play
Alec Baldwin asked 'why was I handed a loaded gun?' after fatal on-set shooting
Producer says Alec Baldwin should be charged with manslaughter over accidental shooting
You may also like
Sport
Newcastle social media accounts see huge follower surge after Saudi-backed takeover
News
Tory MP slammed for saying living on £82,000 salary is ‘really grim’
News
Mark Zuckerberg's net worth tanked after Facebook and Instagram shortage
Sport
Sergi Canos wants his shin pads back
News
Cargo jet weaves through skyscrapers in Brisbane in tense moment
Next Page