British man thought he was 'going to die; after being attacked by otters

He suffered more than 20 wounds after the attack

A British man in Singapore who was attacked by otters has said that he feared for his life.

END_OF_DOCUMENT_TOKEN_TO_BE_REPLACED

Graham George Spencer says he was walking with a friend at around 6.40am on November 30 in the city-state's Botanic Gardens when he saw about 20 otters - some with their young - in front of him.

Spencer said that the otters became scared and provoked when a runner "ran straight into them" and was "treading on them." It was apparently dark so the runner didn't see the animals.

The Brit, who lives in Singapore and is in his sixties, then said the otters "went crazy" and attacked him as the runner carried on.

He told the Straits Times newspaper: "I actually thought I was going to die - they were going to kill me.

END_OF_DOCUMENT_TOKEN_TO_BE_REPLACED

"All of a sudden, they must have thought I was [the runner]."

The otters apparently attacked his ankles and caused him to fall down face first. They then targeted his legs and buttocks, with one otter biting his finger.

Spencer's friend managed to stop the otters momentarily by screaming and shouting at them. The pair then ran to a nearby visitor centre, with the otters chasing them for a short distance.

After 10 minutes, a guard turned up after his break and provided Spencer with bandages. 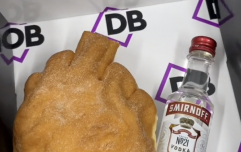 END_OF_DOCUMENT_TOKEN_TO_BE_REPLACED

He then went to the nearby Gleneagles Hospital with his friend, where he was given tetanus shots and oral antibiotics, and had some wounds stitched up, before being discharged on the same day.

His medical bills have reportedly come to around $1,200.

According to local news outlet Mothership.sg, he was left with around 26 bites and puncture wounds on the bottom half of his body.

The group director of the Singapore Botanic Gardens said that they were aware of the incident and were in contact with Spencer.

Dr Tan Puay Yok said that visitors should observe wildlife from a safe distance and avoid feeding or approaching the otters, especially "when there are pups as the adults can be protective over their young".

"The Singapore Botanic Gardens’ volunteers and staff monitor the movements of the otters and educate the public on the importance of observing them from a distance and not interacting with them," he added.