Having been faced with cold temperatures and a 'return to winter' last week, it looks like things are going to be on the up over the Bank Holiday weekend. 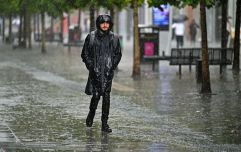 END_OF_DOCUMENT_TOKEN_TO_BE_REPLACED

The Express reports that - while it's likely temperatures will be around the mid-20s - they could reach up to 30C in some parts of the South of England with a 'small nudge in the right direction' as a plume of warm air hits us from Africa.

This could lead to a two-week heatwave that will sizzle the UK. So get your sunscreen out and get your plans together for the weekend ahead.

The best of this afternoon's #sunshine is in the southeast where yesterday is was cold and wet. There's thicker cloud in the west, with convective cloud in between - you can find out more about convection here https://t.co/1Gpd1wtXP6 pic.twitter.com/9X1g7kb5HM

A Met Office forecaster told JOE.co.uk that 30C would be on the high side - although they still reckon we should be in for some sunshine from Saturday.

He added: “It is going to be a fine Bank Holiday weekend, it looks to be very clear and quite bright, hovering at temperatures of up to 20 degrees in the south.

“However, there is a possibility that we could some temperatures to go to mid 20s, as it could be that warm air draws in from continental Europe.

“Without that influence, we will see temperatures of around 18/19 degree across the UK.”

popular
A definitive ranking of every swear word from worst to best
End of life 'suicide capsule' machine gets approval in Switzerland
TikTok 'time traveller' claims ‘humans’ lives will change forever on Christmas Day
Jimmy Carr slaps down anti-vaxxer in crowd with brutal one-line dig
Juan Cuadrado leads complaints over suspect goal in Colombian promotion clash
Arthur Labinjo-Hughes' stepmum 'spiked with salt in prison'
Arthur Labinjo-Hughes' dad to release body to family for funeral
You may also like
News
Met Office issue exact date for upcoming August heatwave
News
UK beach installing BBQs for people to use for free
News
August set for baking month as thunderstorms head for UK this weekend
News
30,000 sign petition calling for fines for people who walk dogs in heatwaves
Fitness & Health
Americans are mocking the British 'heatwave' after realising how hot it really is
Next Page