A 95-year-old blind woman left lying on the floor waiting for an ambulance for nearly 13 hours survived by sucking moisture from a tissue. 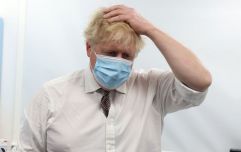 END_OF_DOCUMENT_TOKEN_TO_BE_REPLACED

Joan Massey fell at her Birmingham home and was left in fear and agony before a family member discovered her at around 10am and called an ambulance that didn't arrive until 11.15pm.

She was unable to drink while on the floor, so she had to be given wet kitchen roll to suck by her family.

Massey's family said they eventually managed to spoon some water into her mouth while they waited for help to arrive.

West Midlands Ambulance Service has since apologised, and said it is dealing with high levels of demand.

It emerged last week that all 10 regional NHS ambulance services in England moved on to their highest alert level in September and October, meaning they were under “extreme pressure”.

END_OF_DOCUMENT_TOKEN_TO_BE_REPLACED

The 72-year-old said: "She was on the ground for more than 13 hours. Though we have no idea actually how long she was down before that. She does wear a helpline around her neck, but being in the situation she had clearly forgotten she had it."

Joan was discovered around 10am by Wendy's sister-in-law, Helen Brooks, who stayed with her until help arrived.

"She's a blind lady. So she was in a dark world all that time and not knowing what was happening to her," Wendy explained, adding that Joan's hearing is also "extremely poor".

"Each time we phoned the ambulance they said they were very sorry and that they were busy. We know that and don't expect special treatment - I understand fully that other emergencies take priority, Wendy said, "But 13 hours! We're actually only about 12 minutes away from the main Queen Elizabeth Hospital in Birmingham."

END_OF_DOCUMENT_TOKEN_TO_BE_REPLACED

Wendy said paramedics arrived around 11.15pm and took Joan, "screaming in pain sadly, and she isn't a lady to complain", to hospital, where she says communication problems then made the ordeal even worse.

She claims that since Joan was admitted there had been continual failures in communication between the hospital and the family, leading to confusion over where and how she is.

Doctors have since revealed Joan was suffering from a urinary infection, which is a common cause of falls among, particularly elderly people, and she is receiving treatment for it.