Placing plain-clothes police officers inside bars to protect women from assault is one of the 'immediate steps' that Downing Street is taking to improve security for women, in the aftermath of the tragic death of Sarah Everard and renewed focus on women's safety. 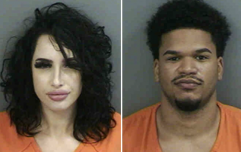 Couple charged for having oral sex in police car

END_OF_DOCUMENT_TOKEN_TO_BE_REPLACED

In the pilot schemes, which have been dubbed 'Project Vigilant' by the government, there will be more patrols by plain-clothed police officers around clubs and bars, with an increased presence around closing time as well. The aim is for these officers to "identify predatory and suspicious offenders".

Project Vigilant is in fact not a new idea, with it being originally launched in 2019 by Thames Valley Police, and won a crime prevention award last year from the International Association of Chiefs of Police.

It is just one of a number of measures that the government have unveiled, with Boris Johnson saying that Sarah Everard's case had "unleashed a wave of feeling about women not feeling safe at night".

Other steps being introduced are a doubling of the Safer Streets fund to provide better lighting and CCTV in neighbourhoods, and the potential introduction of siting measures in parks and routes used by women on their walks home.

However these announcements were made against the backdrop of demonstrators taking to the streets of central London to protest against the police treatment of women who attended a vigil for Sarah Everard on Saturday evening.

Metropolitan Police chief Dame Cressida Dick is facing calls to resign as a result, and along with the suspect in Everard's case being a serving police officer, there is a real crisis of public confidence in the police at the moment.

There will be real questions asked as to whether increased police presence around bars and clubs would actually make women feel safer, and whether these are the right areas that have been focused on.

One Twitter user perhaps summed up the concerns over Project Vigilant best with their interpretation of the logic.