ASOS are being criticised for this rude-looking "blood" necklace

With Halloween just over a fortnight away, you might notice a change in the way people are dressed.

The cold weather means more jumpers and fewer flip flops wandering around the place, and the fancy-dress theme of October 31 brings about a different kind of change as your mates all dress up as different variations of the same three topical costumes (this year, it's Harambe, Brexit and President Donald Trump because that's the scariest thing they could think of hahahahaha).

END_OF_DOCUMENT_TOKEN_TO_BE_REPLACED

As with any time of year, companies are always looking for ways to cash in on the dominant upcoming celebration. In spring, this means everything is rabbit- or egg-related in anticipation of Easter, while  November and December are dedicated to the lead-in to Christmas.

October sees the turn of Halloween, with everything getting a spooky twist, because apparently the world isn't scary enough already with the disappearance of our favourite foods, the emergence of killer clowns and the general political meltdown of the UK and US.

For online clothing provider ASOS, this meant trying to exploit the notorious Halloween cheer by pushing out a line of new horror-themed accessories. By catering their range to the particular season, they were hoping to get people talking.

And they succeeded, just not in the way they might have liked. One item in particular is causing quite the stir online for all the wrong reasons.

The company have released a "dripping blood choker" which, in order to allow it glow in the dark, is white instead of red.

This ASOS "dripping blood" choker looks like ... something else. pic.twitter.com/GAKnvtc4GU 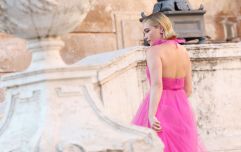 END_OF_DOCUMENT_TOKEN_TO_BE_REPLACED

How nobody during the production of the necklace stopped even once to think about how this might be misconstrued is beyond us, unless they were banking on us all noticing it and basically giving them free advertising.

In which case, fair play. It definitely worked.

popular
FBI release findings of Rust investigation after shooting of Halyna Hutchins
Jeremy Kyle's security guard Big Steve is now on Drag Race
Landlord faces £40k fine after tenant puts swimming pool on roof of flats
The reason why Nottingham Forest don't have a sponsor on their shirt
Tyrone Mings hits back at Graeme Souness for 'weird' article
Comedian cancelled after ‘getting his penis out on stage’ during Edinburgh Fringe Festival
Pedophile chugs liquid and dies in court shortly after he's convicted
You may also like
Fashion
Kate Moss details horrors of fashion industry and how she was asked to go topless at 15
Entertainment
Just like in 1986, sales of aviator sunglasses are up because of Top Gun
Entertainment
Brad Pitt turns up to Bullet Train premiere wearing a skirt
News
Liam Gallagher is getting rinsed for endorsing Clarks but the collaboration makes perfect sense
Sport
Adidas and Gucci team up together to create £785 loafers
Next Page