Manchester mayor Andy Burnham has given a public statement opposing Boris Johnson's plans to put the Manchester and Liverpool regions into Tier 3 lockdown.

END_OF_DOCUMENT_TOKEN_TO_BE_REPLACED

Tier 3 is the most severe set of restrictions, which prohibits households mixing both indoors and outdoors, and enforces the closure of all pubs that don't serve food.

Burnham has opposed plans to put the region he presides over as mayor into such severe lockdown due to the lack of 'proper support' from the government to mitigate its inevitable financial impact.

"Today we communicated our clear and unanimous view to the government," he said.

"It's wrong to place some of the poorest parts of England in a punishing lockdown without proper support for the people and businesses effected."

Mayor of Greater Manchester Andy Burnham says the government's plans to put Manchester in a Tier 3 #COVID19 lockdown is "flawed and unfair".https://t.co/jBSqvMiQoh pic.twitter.com/qEidEaiwOv

"To do so will result in certain hardship, job losses and business failure," Burnham continued. 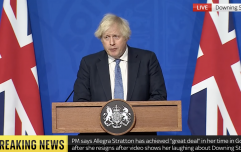 'Plan B' Covid measures to come into force in England from Monday, PM confirms

END_OF_DOCUMENT_TOKEN_TO_BE_REPLACED

"It will cause harm in a different way to people's mental health and is not certain to contain the virus.

"Last night the deputy CMO told Greater Manchester leaders that to bring the infection rates down, any regional lockdown would require widespread closures, way beyond pubs, to stand any real chance of working.

"That would have to be done in tandem with other, neighbouring regions. And even then, it would not be certain to work.

"The government is not giving city regions like ours and the Liverpool city region the necessary financial backing for full lockdowns of that kind.

"That is why we have unanimously opposed the government's plans for tier 3."

If you're wondering what tier of restrictions your local area is now subject to, the BBC have created a tool that tells you, because the government didn't bother.