Spanish-American TV channel Telemundo has suspended two of its presenters indefinitely after they made an offensive gesture about the South Korean football team. 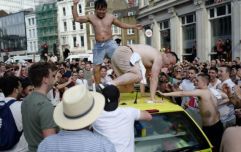 END_OF_DOCUMENT_TOKEN_TO_BE_REPLACED

Unsurprisingly, a huge public outcry followed as footage of the incident spread on social media.

Telemundo is part of the NBC network, whose communications team issued a statement on Thursday announcing that both presenters had been suspended.

"We are extremely disappointed with our morning show contributors James Tahhan’s and Janice Bencosme’s gestures referring to the South Korean national soccer team," it read.

"Our company takes this kind of inappropriate behaviour very seriously as it is contrary to our values and standards.”

popular
Horrifying footage shows cop fatally shoot man in wheelchair 9 times
Patrice Evra slams Jamie Carragher for criticising Cristiano Ronaldo
Machine Gun Kelly stabbed himself in front of Megan Fox to look cool
Frank Lampard admits he 'felt terrible' over comments he made about Paul Pogba
Arthur Labinjo-Hughes: Dad and partner found guilty of killing boy who was tortured and starved
Prince Andrew 'flew with sex slave' who was 'frozen with fear', court told
A definitive ranking of every swear word from worst to best
You may also like
Sport
QUIZ: Can you name every country to have played in a World Cup final?
Sport
Five years on, Germany's demolition of Brazil in the World Cup remains as brutal as ever
Sport
The new Colombia shirt has been leaked, and it's even better than their last one
Sport
The Big Fat Football Quiz of 2018
Sport
What a year it's been for football - here are JOE's 2018 highlights
Next Page