Vaccinations will be required for all international passengers

The CEO of Australian airline Qantas has confirmed in an interview that anti-vaxxers will not be allowed on the airline's international flights going forward. 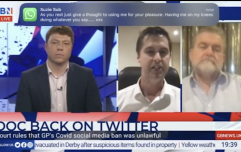 END_OF_DOCUMENT_TOKEN_TO_BE_REPLACED

November has seen a spate of encouraging reports regarding the roll-out of a vaccine for coronavirus, with Oxford University on Monday confirming that its vaccine, manufactured with AstraZeneca, has an efficacy rate of up to 90 percent.

It's hoped that initial roll-outs of such vaccines will be underway beyond the New Year and Alan Joyce, the CEO of Qantas, has stated that it's likely that the company will require proof of vaccination for passengers looking to board international flights.

Speaking on Australian show A Current Affair on Monday, Joyce said: "We are looking at changing our terms and conditions to say that, for international travellers, we will ask people to have a vaccination before they get on the aircraft.

"Whether you need that domestically, we will have to see with COVID-19 and the market but certainly, for international visitors coming out [of Australia] and people leaving the country we think that's a necessity."

"I think that's going to be a common thing talking to my colleagues in other airlines around the globe," he added.

While the vast majority of businesses have been hit hard by reduced spending exacerbated by job losses as a result of the pandemic, the implementation of national and regional lockdowns, as well as the closure of some borders, has seen an enormous reduction in aviation travel in 2020.

Joyce, while welcoming the implementation of a vaccine, has warned that he doesn't expect the industry to see pre-pandemic figures until well beyond the end of 2021.

"Unfortunately with the levels of the virus in the United States and in Europe, we're not going to see operations to those destinations in any real strength until we see a vaccine being rolled out, which is likely towards the end of 2021," he said.