A petition to ban David Cameron from re-entering Britain has nearly 30,000 signatures

The prime minister - and star of Call Me Dave - is currently on an Easter break in Lanzarote, where some eagle-eyed tourists have even spotted him drinking a beer as he laps up the sunshine with wife Samantha.

Unfortunately for the man in charge of Britain, a lot of people are trying to make sure he stays on holiday for good.

Satirical site The Canary posted a spoof article that claimed over one million people had signed a petition to ensure Cameron is not allowed to return from Lanzarote. The idea was so popular that someone decided to run the petition for real on change.org, and at the time of writing it is just shy of 30,000 signatures.

The appeal reads: "David Cameron presents a clear and present danger to the short, medium and long term interests of the country. As such, the UK should institute a temporary ban on his return to Britain at the conclusion of his holiday in Lanzarote."


They might struggle to hit the million mark, but the page has gained a huge amount of traction in very little time. Another 70,000 signatures before Dave returns would mean the petition can be debated in parliament. 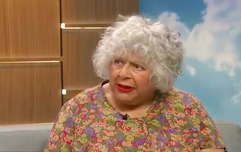 END_OF_DOCUMENT_TOKEN_TO_BE_REPLACED

We're not sure how that would work. Maybe he could take part via Skype? FaceTime from a sunbed? We can't imagine Theresa May would be a huge fan of the idea either, but politics is full of surprises.

If you decide that it's in the country's best interests to render ourselves prime minister-less for the immediate future, you can show your support here.

We have reached out to Downing Street for Cameron's comment on the matter, but they told us he's currently showing the Atlantic how to wakeboard (possibly not true).


popular
The JOE Friday Pub Quiz: Week 197
QUIZ: Identify the brand from just its slogan
A definitive ranking of every swear word from worst to best
Who is the most handsome footballer in the Premier League?
Alex Ferguson gave a very strange reason for not signing Jordan Henderson in his autobiography
Here's how to see who's been taking screenshots of your Instagram Stories
21 British game shows ranked from worst to best

You may also like
Sport
A history of politicians pretending to like football
Politics
David Cameron will be remembered as one of Britain's worst prime ministers
Politics
This is how much Theresa May could earn now she’s no longer prime minister
News
David Cameron never really believed he'd have to hold a Brexit referendum, says Donald Tusk
Entertainment
Matt Damon stars as David Cameron in Saturday Night Live’s savage Brexit sketch
Next Page