Up from the 36 Chambers

You don't need us to tell you that the Wu-Tang Clan are one of the greatest and most influential hip-hop groups of all time. Possibly the greatest. 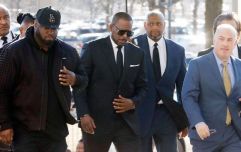 A new Lifetime documentary on R. Kelly will air next month

END_OF_DOCUMENT_TOKEN_TO_BE_REPLACED

With their mixture of kung-fu iconography, street-level realness, raw production and free-roaming lyrics, they defined the sound of classic early 90s East Coast rap as much as anyone you care to mention.

They were superheroes of rap, bringing us unique, diverse personalities - the zen of the RZA, the showmanship of Method Man, the surrealism of Ghostface Killah, the unpredictability of Ol' Dirty Bastard - that all gelled together to form a team as powerful as the Avengers.

Enter the Wu-Tang (36 Chambers) is now over 25 years old, and in those two and a half decades nearly every member has gone on to have a strong and fascinating solo career.

Now the group is going to get the historical treatment they deserve, with a four-part in-depth documentary from Showtime. Wu-Tang Clan: Of Mics and Men will feature new interviews and never-before-seen footage, telling the definitive story of the Wu.

And the first trailer looks incredible.

Throughout the history of hip-hop, no single group changed the game in the same way the Wu-Tang Clan did. In the early ’90s, a group of young rappers from Staten Island and Brooklyn joined forces to escape the poverty, violence, and oppression of their neighborhoods through music. Hot off the success of their single “Protect Ya Neck,” RZA, GZA, Ol’ Dirty Bastard, Inspectah Deck, U-God, Ghostface Killah, Method Man, Raekwon da Chef, and Masta Killa “formed like Voltron” to release Enter the Wu-Tang (36 Chambers), a seminal album that redefined a genre and forever changed the economics of the industry.

The real story of the Clan unfurls here, with never-before-seen footage and interviews recounting the obstacles traversed to stay united as one Wu family. Director Sacha Jenkins (Fresh Dressed, 2015 Sundance Film Festival) poignantly captures their struggles and triumphs in intimate detail, creating a group portrait that transcends music and delves into broader themes of race, economic strife, and brotherhood while weaving their distinctly raw and resonant sound throughout.

The first two episodes will screen at the Sundance Film Festival this week, with the full series due to air on Showtime in the US.

Sundance has also released this interview with director Sacha Jenkins.