Someone synced Childish Gambino's "This Is America" to Carly Rae Jepsen, and it fits perfectly

It is genuinely incredible how well they sync up

Last weekend, Donald Glover released the searingly brilliant video for "This Is America", the first track from his as-yet-untitled final album under the Childish Gambino moniker. The instantly iconic clip sees Glover dancing shirtless around a barren warehouse, flanked by violent cops, kids with iPhones and allusions to the four horsemen of the apocalypse. It is a strikingly powerful piece of work, elevating the concept of the music video to a timely, almost art installation, which rewards repeated close viewings and is open to multiple interpretations. 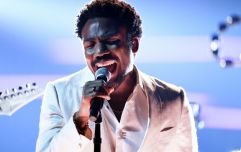 END_OF_DOCUMENT_TOKEN_TO_BE_REPLACED

On a seemingly unrelated note, Carly Rae Jepsen is the greatest pop star of this generation, and I will fight anyone who disagrees. Her true masterpiece may be her third record E•MO•TION, but her breakthrough single "Call Me Maybe" (from 2012's Kiss), is one of finest three-minute pop songs ever recorded. An insatiably infectious earworm, it buzzes with innocent energy of a girl making the first tentative move on a cute guy. It doesn't matter if they end up living happily ever after or he never actually calls, that rush at the very start of flirting with someone you fancy is one of highest of natural highs and something we can all relate to. And the strings, the delightfully cheesy drums, and the wonderfully literal lyrics all come together to create the perfect audio encapsulation of this feeling.

Anyway, someone has synced the "This Is America" video to "Call Me Maybe", and it is mindblowing how well it syncs up.

Ok, so some people have suggested that we shouldn’t be making memes out of something that deals with such heavy subject matter, especially since one of main reading of the video is that disposable culture distracts us from America’s deep rooted problems. But this is the internet, memers gonna meme, that's just what happens.

It all syncs up perfectly. It even looks like Glover is singing the lyrics. I feel wrong laughing at it.

how is it so perfectly aligned?!?