Hey now. You're an all star. Get your mask on. No way!

Despite there very much still being a pandemic on, thousands of fans gathered at the Sturgis Motorcycle Rally in South Dakota, USA on Sunday to watch rock band Smash Mouth.

Footage posted to Twitter shows revellers all packed in together, with almost no one wearing masks or social distancing. Smash Mouth frontman Steve Harwell can be heard saying: "“Fuck that Covid shit. Now we’re all here together tonight.”

You can watch the footage below.

Here is a brighter video to see all the people (credit KOTATV) pic.twitter.com/P7XW46BLiS

The Sturgis Motorcycle Rally is described as "10 days/nights of riding, food and music." It's estimated to attract over 250,000 motorcycle fans.


Smash Mouth were just one of the bands due to perform at the festival; Willie Nelson, ZZ Top and Lynyrd Skynyrd were all booked, but pulled out of their performances. ZZ Top were replaced by a ZZ Top cover band. 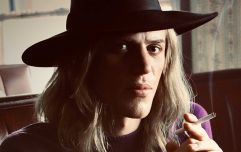 END_OF_DOCUMENT_TOKEN_TO_BE_REPLACED

The band drew criticism on social media for continuing to perform at the event. One user commented: "I have seen Smash Mouth live and under no circumstances should anybody EVER risk their life, well-being, or even 30 minutes of their time for that experience."

"They had a very strict social distancing and mask policy in place for all workers. We spent endless hours advancing this event to make sure that it was pulled off as safely as possible and we are very happy with the outcome."

According to the organiser's website, there were signs at the festival site reminding people to socially distance, there would be hand sanitisation stations and that masks were required inside the amphitheatre.

However, from the video footage taken at the event, it appears that not many people were following the rules on masks or social distancing.

You may also like
Music
Taylor Swift pays £23,000 for a London student to go to university
News
Stormzy donates £500k to scholarships for disadvantaged students
Music
Cardi B brutally responds to Carole Baskin's criticism of 'WAP' video
Music
Ed Sheeran is reportedly expecting a baby with wife Cherry Seaborn
Music
Ben Shapiro reading Cardi B lyrics is the most awkward thing you'll see today
Next Page