Looks like there's a new Adenuga on the way

Congratulations appear to be in order for Skepta who today posted a pregnancy scan via his Instagram. 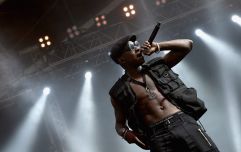 END_OF_DOCUMENT_TOKEN_TO_BE_REPLACED

The scan suggests that the pregnancy is in its third trimester.

The new arrival is set to join a long line of famous Adenugas. Of course there's Skepta himself. There's his rapping brother JME. Then there's his sister Julie, who is famed for her work as a radio presenter.

Now the question on everyone's lips: who is the mother?

Is it super model Naomi Campbell, who has been rumoured to have been dating Skepta ever since the pair posed semi-naked together for GQ.

Campbell also previously shared a pic of herself topless and wearing boxers from Skepta's range Mains, with the "Shutdown" rapper gazing at her from across the couch. She soon deleted the message.

While nothing has been confirmed as of yet, if it's not Naomi Campbell who is the mother then it could be Skepta's rumoured secret long-term girlfriend's child.

Regardless of who the mother is, congratulations are definitely in order for the man who has helped push grime culture to new heights and won the Mercury Prize back in 2016 for his album Konnichiwa.

popular
Man knocked out in single punch by ASDA security guard and dragged across floor by his hoodie
Jada Pinkett Smith admits she had to lower her sex expectations of Will Smith
Influencer criticised for photoshoot at her dad's funeral
Average number of sexual partners in UK revealed
Gordon Ramsay hits back at radio host for 'fat-shaming' daughter Tilly
UFC star Paddy The Baddy explains why he's 'Scouse not English'
Mum and boyfriend arrested after three children found living next to remains of eight-year-old brother
You may also like
Entertainment
Americans left confused as British grime stars pop up on Drake's new release
Music
The BRIT Awards keep making it harder to give a shit about the BRIT Awards
Entertainment
Skepta wins the coveted Mercury Music Prize
Music
Everything you need to know about Skepta's 'Konnichiwa'
Entertainment
Little Mix, Skepta and more have their say on Syrian air strikes...no, really
Next Page