You are now about to witness the strength of street knowledge

Music biopics can be great, but they also tend to all fall into the same tropes. Hard upbringing, big break, personal struggles, then big heroic come back, or die just before they were about to have a big heroic comeback. Look at the Johnny Cash film Walk The Line – it’s a good movie, and Joaquin Phoenix and Reese Witherspoon are both great, but it ticks every single box on the music biopic checklist. Hell, the hilarious Walk Hard: The Dewey Cox  basically just copied it beat for beat.

END_OF_DOCUMENT_TOKEN_TO_BE_REPLACED

The genre needs a shot in the arm. And Straight Outta Compton, which is on Channel 5 at 10pm tonight, gives it a welcome boost of energy by telling the story of N.W.A., the notorious late 1980s hip-hop group that gave us Dr Dre and Ice Cube, and basically created gangster rap.

In truth, it doesn’t deviate that much from the formula, but the focus on rap, instead of some crusty old rock star, makes it feel really fresh and exciting. It covers not only the controversy the group caused with tracks like “Fuck The Police”, but also the social issues that help birth them. It then continues on to follow Dre and Cube’s post-N.W.A., including the origins of Death Row Records and appearances from Snoop Dogg and 2Pac. 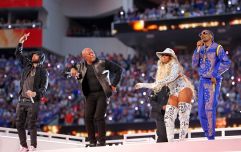 END_OF_DOCUMENT_TOKEN_TO_BE_REPLACED

It has been rightly criticised for sugar-coating some of the groups actions, including ignoring Dr Dre’s physical abuse of Dee Barnes, and underplaying the contributions of the non-Dre/Cube/Eazy-E members. Still, it is a very good overview of the era, and essential viewing for anyone with an appreciation for 1990s hip-hop.

Straight Outta Compton is on Channel 5 at 10pm tonight.