Today is the 21st anniversary of Oasis at Knebworth, when British music was at its biggest and best

I was but a one-year-old when Oasis took to the stage at Knebworth.

It wasn't just a concert. Ocean Colour Scene, The Prodigy, Manic Street Preachers, The Chemical Brothers and The Charlatans played throughout the two-day mini-music festival, celebrating British music and the level it had reached.

The main act, Manchester legends Oasis, played two nights on the grounds to 125,000 people each night. That's a quarter of a million people in total but it could have been a whole lot more.

Over 2.6 million people applied for tickets for the shows, making it the largest ever demand for concert tickets in British history.

Oasis could have played there for 18 days straight.

21 years since Oasis played Knebworth. 4% of the population applied for tickets! #history pic.twitter.com/yFqG233v2I


The band's documentary Supersonic, released in October 2016, started and finished with the iconic concert, and some might say even signalled Oasis' peak.

Director of the documentary, Mat Whitecross, said the band had different views about what should have happened after Knebworth:

“Noel’s thing is, ‘If we’d had the balls to do something like that, maybe we’d be talked about in the same hallowed tones as The Beatles. On the other hand, I had more to give, more to do and I was always writing and had a stack of songs.’

"When we met Bonehead, he said they should definitely have stopped then – big mistake to carry on. Liam was adamant that wasn’t true, saying, ‘You keep going because what else we gonna do? Go home and become a plumber? Fuck that!’” 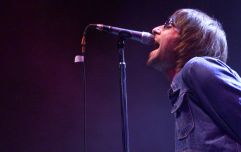 END_OF_DOCUMENT_TOKEN_TO_BE_REPLACED

What's funny about it is I, a 22-year-old Oasis fanatic, grew up idolising the Gallagher brothers; Noel was the reason I begged my mam to buy me a guitar for Christmas '06.

I watched videos of Knebworth on YouTube; I wanted to be a musician. I thought about how great it would be to play in front of hundreds of thousands of adoring fans and hear your songs roaring back at you.

'Lucky Noel Gallagher,' I thought, only to realise he doesn't remember a thing of it.

"Genuinely, now, if I close my eyes, I can’t remember walking on stage at Knebworth," he told Kirsty Young on Desert Island Discs. "I know it took place because there were lots of people there."

How did you know you were at the concert? Columbia. Bang. Acquiesce. Bang. Supersonic. Bang.

Name another band that would have you losing your shit after just a few songs?

They finished the shows with their iconic version of The Beatles' I Am The Walrus, backed with a wall of fireworks. Whatever way you want to look at it, those fireworks signalled both the height of Oasis' popularity and their subsequent decline there after.

John Squire of The Stone Roses even joined the band for Champagne Supernova and remoulded the song with his crazy riffs, adding an extra minute or two to the already seven-minute long symphony.

We know it's a lot to ask, but if you can spare the time, sit back, relax and enjoy when British music was at its best. And that's coming from someone who was only in nappies when Oasis were the best band in the world.