That's what Nile Rodgers said yesterday after I asked him whether or not the world needed new music from him and his band Chic.

Speaking to him backstage at this year's Isle of Wight Festival, on the same day Chic's new single "Till the World Falls" was released, he added: "Whenever I write anything it’s all from my heart and I try and just give it to the world and hope that they understand where I’m coming from. I don’t think that I’m solving any problems. I don’t think that I’m doing anything other than speaking from my heart, I just really love what I do.”

Set to arrive on Nile Rodgers & Chic’s first new album in 25 years, It’s About Time, Rodgers said: "I’ve had the great privilege of producing some of the most important artists in the world so when it came time to collaborating for my own record the barometer was, shall we say, pretty high." 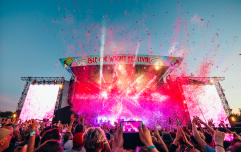 50 for 50: The best bits from this year's Isle of Wight Festival

END_OF_DOCUMENT_TOKEN_TO_BE_REPLACED

Without one of its original co-founders, bassist Bernard Edwards, who sadly passed away in his hotel room in 1996 after a show in Japan, according to Rodgers Bernard would have been a fan of the new Chic song.

"He would have loved it actually because we’re in an interesting time right now," he explained. "Bernard and I, our relationship was a phenomenal relationship that developed in a great way over time. When I first met him he was really completely apolitical and so we had a deal that Chic records would never be overtly political because I used to come from a very political background so everything had double entendres or had meanings that weren’t quite obvious to the regular person.

"But when we wrote 'Rebels Are We' and we started to take a different look at life things were changing around us in a very drastic way and so I think he would have loved this new song. In particular I think he would have really appreciated lyrics like: 'The world has gone mad we might be safer on the dance floor.’"

Nile Rodgers & Chic's "Till the World Falls" is out now and can be streamed here. The new album It's About Time arrives September 14th 2018 and can be pre-ordered here.