For those that want to hear nothing about the ‘C’ word for another two months, you might want to look away now.

One of the biggest moments in the Christmas calendar is the release of the John Lewis advert.

Every year, the nations waits eagerly for the ad to appear on our screen and see if the newest edition will have us shedding a tear. And it’s not just the ad that gets us going, it’s the song too.

John Lewis has just announced the singer who will be lending their vocals to this year’s track and it is likely to be a tear-jerker.


The department store has signed up Elton John to perform this year’s number and for a hefty price tag. 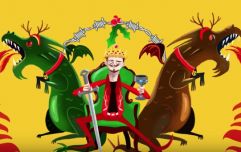 Post Malone releases new song, gets into the Christmas spirit

END_OF_DOCUMENT_TOKEN_TO_BE_REPLACED

The 71-year-old is reportedly set to take home an eye-watering £5million for his part in the iconic TV ad singing his legendary song, "Your Song".

And it looks like he’s already done the majority of the work. According to sources, the singer spent four days at London’s Pinewood Studios shooting his scenes for the ad.

The finished edit is expected to arrive on our screens in November and will tell the story of a young Elton John opening Christmas presents.