Foo Fighters are opening their own pub in London this week

Foo Fighters are one of the all-time greats. 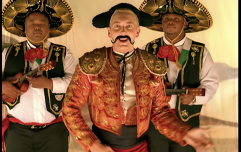 END_OF_DOCUMENT_TOKEN_TO_BE_REPLACED

The hospitality trade, of course.

From September 15 - 20, The Foo Fighters Arms will be opening its doors to the public. Located at 339 Cambridge Heath Road, London E2 9LH, the pub will be stocked with Foo Fighters beer, merchandise and special limited edition items for fans to get their hands on.

END_OF_DOCUMENT_TOKEN_TO_BE_REPLACED

The pub opening coincides with the release of the Foo's ninth album Concrete and Gold, which comes out on September 15.

A statement on the pub's website reads: "Foo Fighters are proud to announce the opening of the Foo Fighters Arms in London for one week only.

"Doors will open to the public on 15th September to celebrate the release of their new album Concrete and Gold and will host a series of events for both fans and the general public.

"There’ll be Foo Fighters beers and exclusive merchandise on sale throughout the week. Keep an eye on the band’s social media channels to find out more."

END_OF_DOCUMENT_TOKEN_TO_BE_REPLACED

Some of those events include a release party on the day the album comes out and a special Foo Fighters pub quiz on September 18.

And if Dave Grohl happens to be reading this, could you see your way to getting us into the invite-only launch night party? Cheers dude.

popular
Tens of thousands rush to sign-up to 'Enough is Enough' campaign - crashing their website
Tourists left 'squealing' as thousands of venomous crabs invade UK beach
Stranger Thing's star Noah Schnapp slides into Love Island's Ekin-Su's DMs
TikTok investigating Andrew Tate after users demand he’s removed from platform
Runner finishes last in 400m race as penis keeps falling out of shorts
Mum learns paedophile neighbour took over 50 pictures and videos of her as she sunbathed
Boris and Carrie put south London home on the market for £1,600,000
You may also like
News
Nightclub bouncers will be armed with 'Smart Water' to tag drunks so police can arrest them
Life
Platinum Jubilee: Brits to sink 712 million pints over weekend
Entertainment
Ed Sheeran enjoys night out with random dads during surprise pub visits
Life
One of UK’s biggest pub chains hikes price of pint by 45p
News
Chef tells customers angry about dogs in pub - 'go elsewhere, they will be treated like royalty'
Next Page