Everything you need to know about Skepta's 'Konnichiwa'

Skepta's fourth album 'Konnichiwa' is coming and its going it be big. 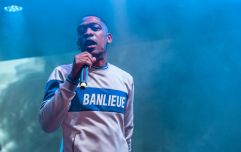 Wiley charged with assault and burglary of kickboxer friend

END_OF_DOCUMENT_TOKEN_TO_BE_REPLACED

We're excited to say the least.

This week has seen Skepta pop into the Beats 1 studio for an interview with Apple Music's Zane Lowe, so here's the JOE team breaking down everything we know about Konnichiwa.

It's coming out May 6

Originally expected sometime last year, Konnichiwa was pushed back as Skepta enjoyed a year to remember. Between Drake shoutouts, Brit Award appearances with Kanye West and one a memorable performance on Jools Holland (there's a weird sentence to write), Skepta's been a bit busy. But last week saw the grime artist reveal the album will be released May 6th. You can even pre-order it through iTunes here.

It's going to feature "Shutdown" and "That's Not Me" 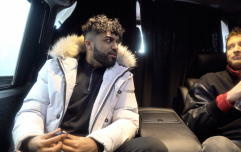 Is Bradford the new home of UK grime?

END_OF_DOCUMENT_TOKEN_TO_BE_REPLACED

Truss mi daddi, there was no way Skepta was going to not feature two of the standout singles of 2015. While iTunes is only mentioning a 12 track offering, if Skepta's been hanging around Kanye, there's plenty to decode from Skepta's tracklist posting. A bonus track wouldn't surprise us.

It's going to boast some stellar features

In an interview with Beats 1, Skepta revealed Pharrell, Wiley, Chip, Novelist and BBK will all have features on Konnichiwa.

Speaking on working with the former Neptunes beatmaker, Skepta said, "Having Pharrell to bless my album with this sound we made maybe now when you hear my beats maybe you can see the freeness of his music thats what we’re doing as well."

But Drake will not be featuring

While Drake's transformation into a hench Stone Island rocking London roadman may be one of the best side stories in music right now, his friendship with Skepta hasn't landed him a Konnichiwa.

"We’re supposed to be doing something with his album", said Skepta to Zane Lowe about further  OVO x BBK collaboration. "I’ve learnt in the past trying to rush fake music, trying to act like you two are friends or trying to over force it online just like eradicate all that stuff and just do greatness as friends."

It's going to be really, REALLY good.

This one is more of a hunch, but if new track "Man (Gang)" is any indication, Konnichiwa is going to be packed full of killer bars, stellar beats and the type of aesthetic to make you do the stinkface and wave your arms about.

Skepta has promised his fourth album will be an authentic grime album, not watered down by any pop attempts to make it more palatable.

"Everybody knows this is a sound its the UK sound, its a turn up sound, its a style, the style we speak its the way we move, everything about."

“I knew I had an obligation to represent the country when I did this album. Not just like different MCs but sonically how it sounds I know what is on my back with this album. I’ve got every element from London that is needed to make this album what it is.”

We can't wait. Konnichiwa is out May 6th.