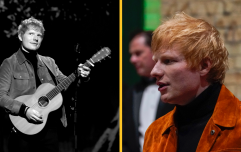 END_OF_DOCUMENT_TOKEN_TO_BE_REPLACED

Currently on the North American leg of his global Divide stadium tour, the pop megastar has now announced a pretty substantial list of 2019 headline shows, which will follow-on from Ed’s first-ever, and already announced, sold out South Africa stadium tour in March.

Running from May to August 2019, the newly announced dates will see Ed take the stage in France, Portugal, Spain, Italy, Germany, Austria, Romania, Czech Republic, Latvia, Russia, Finland, Denmark, Hungary and Iceland before culminating in the UK with two special sets of homecoming shows in Leeds, West Yorkshire on the 16th and 17th August at Roundhay Park and Ipswich, Suffolk on the 23rd and 24th August at Chantry Park.

As one of the world’s most in-demand live acts, this past summer Ed played to over 1.1 million people in the UK, including four nights at London’s Wembley Stadium, marking the biggest-ever solo tour [without a band] that the UK has ever seen.

One thing to note when purchasing tickets for this tour, Ed's team have a very strict stance against anyone using secondary ticketing sites.

"Once again, Ed and his team have a strict stance against anyone using unethical secondary ticketing sites. The UK shows on this tour will use "paperless" ticketing technology, which means that the credit or debit card of the purchaser of the tickets will become their ticket. This stops secondary sites and ticket touts being able to resell tickets at inflated prices and ripping off fans. Fans who become unable to go to the shows will be able to sell their tickets from 1st November to other fans at the price they paid + a booking fee at their point of purchase.

"The promoters urge all customers to only use the official ticket sites listed at Edsheeran.com and are reminded that Viagogo.com is not an official ticket vendor for this tour. If anyone has any concerns with this or similar sites, they should consult the FanFair Alliance website at http://bit.ly/2sG24Er

"As per the 2018 stadium tour, the promoters will be monitoring the sales transactions in close conjunction with the National Trading Standards Cyber Crime team to identify multiple purchases which are in contravention of the terms and conditions for the sale of the Ed Sheeran tickets and cancelling all tickets purchases that contravene these terms and conditions."

For a list of FAQ’s on this please visit:  Edsheeran.com

Tickets go on sale at 10am Thurs 27th September.

The dates are as follows: