Why did Serbia sing about Meghan Markle at Eurovision 2022?

The Eurovision song contest has officially bellowed towards the voting period, and very soon, we will know how the UK has done.

END_OF_DOCUMENT_TOKEN_TO_BE_REPLACED

Amongst the usual antics of the occasion, Serbia raised eyebrows on social media after they seemed to sing about Meghan Markle.

Serbian entry Konstrakta sang In Corpore Sano, which incorporates both Serbian and Latin, sings: “What could be the secret of Meghan Markle's healthy hair?”

END_OF_DOCUMENT_TOKEN_TO_BE_REPLACED

“What could it be? I think it's all about deep hydration," the singer, whose real name is Ana Đurić, added.

According to the Express, the singer explained: “Meghan Markle isn’t that important here, but she’s representative of all those people in the media that we’re focused on.”

“She hasn’t contacted me yet, but I’d like for her to hear it" she added. “This is a song about the atmosphere in which we’re living, which has put health as the highest value.”

Serbia is being delightfully weird and I’m obsessed #Eurovision pic.twitter.com/P20JaFg923 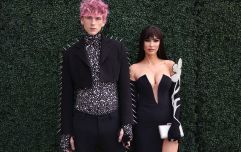 END_OF_DOCUMENT_TOKEN_TO_BE_REPLACED

Further explaining the overall meaning of the track, she said: “This is a song about health and the atmosphere in which we’re living, which has put health as the highest value.

“We needed a compulsive aspect during the song, which we decided would be the washing of hands.

“I think that the staging can make an impact, especially when you dive into the lyrics.”

Serbia is serving us Eurovision chaotic camp energy and I’m here for it #Eurovision pic.twitter.com/ERMTrl0sNM

Serbia was quite the topic of conversation online, where many applauded the performance.

"Serbia’s is the only entry to capture the sheer madness of the age. I am seriously impressed," wrote one Twitter user.

Serbia is giving me winner vibes. So hypnotic, epic and Konstrakta is so iconic.#Eurovision

Another said: "The Serbia song I think is what you see before you die."