Where were you while we were getting high?

As soon as we heard that glorious and euphoric opening riff from Rock 'n' Roll Star, music would never be the same.

END_OF_DOCUMENT_TOKEN_TO_BE_REPLACED

"We're not arrogant, we just believe we're the best band in the world", said Noel Gallagher and on their iconic debut, Definitely Maybe, they reinvigorated an entire generation with tunes like Live Forever, Supersonic, Slide Away...actually, f**k it, every song on that album is superb.

Yet again, Manchester was the centre of the musical world as Definitely Maybe became the fastest selling debut album of all time in the UK, it went on to sell over 15 million copies worldwide.

Nobody could put it any better.

On a musical note, during the recording process Noel changed Oasis' sound by putting an emphasis on ballads and choruses while the string arrangements on tracks like like Don't Look Back in Anger and Champagne Supernova are still incredible to hear.

END_OF_DOCUMENT_TOKEN_TO_BE_REPLACED

WTSMG isn't the best album that you'll ever hear, but it's easily one of the most important for a certain generation. It's a perfect gateway record because Oasis were unashamed in borrowing from The Beatles, The Kinks, Stone Roses, The Smiths, The Clash and countless others on the record.

The album fully stands up on its own merits though because you don't get to play in front of 250,000 people at Knebworth without having talent, tunes and a massive bunch of people that were absolutely f**king mad for it.

On a wonderful record, it's arguable that Champagne Supernova is the standout track because as any fan of the band will know, it's those quieter, softer and more introspective moments that really resonate the most.

Yes, the bravado, swagger and pomp of Liam and Noel was always clear, but there's also a far more soulful and pensive side to the band on tracks like Talk Tonight, Don't Go Away, The Masterplan and Half the World Away. This is never more clear than on Champagne Supernova.

If you saw the superb documentary Supersonic, you probably marveled at the scene when Liam Gallagher was laying down the vocals on Champagne Supernova. First, we hear about how he’d record Oasis songs in a single take after quickly running through them once with Noel, then we see it happen.

It's impossible not to get chills. 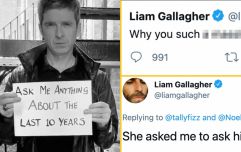 Liam Gallagher trolls brother Noel on Twitter, asking 'why you such a massive c***?'

END_OF_DOCUMENT_TOKEN_TO_BE_REPLACED

In my view, the band left their best track till last on (What's the Story) Morning Glory? because as Noel says, "it means different things when I'm in different moods".

It's impossible not to love how the strings and cymbals rush in to fill the space that the guitars create - FYI, Paul Weller provided lead guitar and backing vocals here.

It's somewhat fitting that "Champagne Supernova" was the last original song that Oasis performed live together. In my opinion, it's the best track from an iconic album and one of their very best.

Have another listen to a piece of iconic music.