Daniel Cormier is no longer the UFC light heavyweight champion

The 205-pound champion told ESPN on Friday that he has come to a decision to give up the title rather than have it stripped from him, which, in his words, would suggest he had done something wrong. 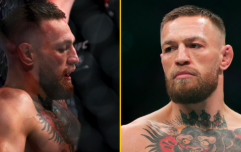 END_OF_DOCUMENT_TOKEN_TO_BE_REPLACED

Jon Jones and Alexander Gustafsson fight at UFC 232 on Saturday night and Cormier would rather walk away than have it taken from him.

He hasn't fought in the division since his defence of the belt in January after it was returned to him in 2017 when Jon Jones failed a drug test. He beat Volkan Oezdemir that night and since went to heavyweight to win the title in the summer before defending it in November. Meanwhile, the light heavyweight championship has not had a champion to defend the title.

So the UFC have intervened.

“... Being stripped of a title suggest you’ve done something wrong, and I haven’t. I’d rather walk away this way. ... They can have it.” https://t.co/ItxXrV0wyY

Writing to Ariel Helwani of ESPN, he confirmed the news.

"Today I am going to relinquish the UFC light heavyweight title. I am not going to be stripped of the belt that I've defended with my all for three and a half years.

"I'd rather walk away this way, with my head held high as it always has been, than have the history books say I was stripped. I've defended this title this year. I was approached with the idea of fighting at heavyweight, so I took it."

Cormier has fought three times in 2018, in two different divisions. He's been an active champion and he has defended the light heavyweight belt in this calendar year.

popular
Micah Richards winds up Roy Keane with Alf Inge Haaland joke
Boris and Carrie put south London home on the market for £1,600,000
New heatwave this week will be longer than July's - and Brits told not to have barbecues
Inbetweeners star Joe Thomas has been in a relationship with his co-star for over 10 years
Massive piece of Elon Musk's spacecraft lands on farmer's property and could make him very rich
Runner finishes last in 400m race as penis keeps falling out of shorts
Lioness Chloe Kelly's face says it all after Richard Madeley calls her Coco in 'sexist' exchange
You may also like
MMA
Dana White: Brock Lesnar has retired from MMA
Entertainment
Brock Lesnar agrees new WWE deal which entitles him to UFC fight
Sport
A sneeze on fight day almost forced Daniel Cormier to pull out of UFC 230
Sport
Daniel Cormier submits Derrick Lewis, calls out Brock Lesnar and kisses Joe Rogan
Sport
Irish fan rushed into Octagon at UFC 229 in attempt to protect Conor McGregor
Next Page