This is a game changer.

The fine, fine people at Yorkshire Tea have launched a new teabag that promises to bring us the exquisite combination of tea AND biscuits, in a single, intoxicating beverage without all those pesky 'the crumbs on your jumper'. 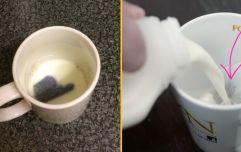 END_OF_DOCUMENT_TOKEN_TO_BE_REPLACED

Apparently the tea company has captured one of Britain's most beloved tastes by utilising a 'smattering of malty sweetness'. What is a smattering? I'm not exactly sure, but it sounds really, really good. A lovely smattering. I could really go for a nice smattering.

Kate Halloran, who is Tea Innovation Manager at the company (what a job by the way) explained the decision to revolutionise the teabag industry as follows: "Biscuits are so often linked to tea, we thought why not just make life easier and put the flavours together in one delicious brew?"

She makes a very strong point.

"We're offering all the happiness of tea and biscuits - just without the biscuit and any of the potential pitfalls that come with it. Gone are the dunking-fail days of biscuits too big for your mug, soggy crumbs at the bottom of your brew or the mid dunk breakage - we're embarking on a new era of biscuit-flavoured joy." 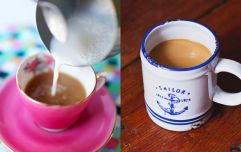 END_OF_DOCUMENT_TOKEN_TO_BE_REPLACED

She makes a really strong point. Biscuit-flavoured joy? Sign me up, please.

The brew has been concocted by the biscuit-connoisseurs and tea-experts at Taylors of Harrogate, and will join their formidable Yorkshire Tea range alongside the best-selling Breakfast Brew and the Bedtime Brew. The tea is launching this month and will be available in Morrisons now, with packs of 20 bags costing £2.29. That's a bargain, isn't it?

I'd still recommend getting an extra pack of hobnobs though... just in case.

popular
Man with world’s biggest penis says Oscar winner slid into his DMs
'Super recogniser' draws 'accurate' modern Maddie McCann to help police find her
Bride faints on groom, vomits and gets pooed on during ceremony
Mum in jail for murder pays tribute to son, 6, killed by his dad and new girlfriend
Chilling video shows moment step mum tried to get away with murdering boy, 6
Bellingham and Haaland criticise refereeing performance after Bayern Munich defeat
'I did three grams of coke during a game': Inside football's problem with Class A drugs
You may also like
News
You can now get paid to drink tea and travel the world
Comedy
Which is better? Microwaved tea vs normal tea
Food
What biscuits last the longest in a cup of tea?
Life
In defence of 'the worst video in the world'
Life
Fancy a cuppa? Scientists link black tea with weight loss
Next Page