The world's longest pedestrian suspension bridge has been unveiled at the Arouca Geopark in Portugal. It runs for a total of 516 metres between two mountains and hangs 175 metres, or 1,692 feet, above the regions fast-flowing River Paiva. 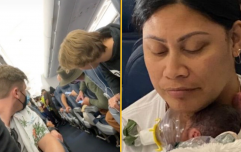 END_OF_DOCUMENT_TOKEN_TO_BE_REPLACED

As you can see in The Guardian's video tour below, it truly is an impressive engineering feat and perhaps most static images don't do it justice. As such, a swathe of people from the town of Arouca gathered for the official opening ceremony on Sunday to take the first steps across the bridge.

Hugo Xavier was the first person to take make the inaugural journey across the new world's longest pedestrian suspension bridge, having now surpassed the Charles Kuonen Bridge in the municipality of Randa, located among the Swiss Alps, which measured at 494 metres and held the record since 2017.

Xavier said that, at first, “I was a little afraid, but it was so worth it,” a described the crossing as "extraordinary, a unique experience" and "an adrenaline rush". Fellow band vertigo-sufferer, Rui Brandao, recommended not looking down when crossing - oh really, Rui!?

The bridge is now being referred to as, simply, '516 Arouca' and will no doubt attract tourist from all around the world when international travel full resumes. Arouca’s mayor, Margarida Belem, told AFPTV that the bridge would be a “fundamental attraction”.

A local tour guide went on to describe the additions as "a breath of fresh air for our land because it will attract more investment, more people” and "will bring a new dynamic to Arouca".

popular
Scotland fans help with clean-up in Leicester Square as Tartan Army leaves London
The JOE Friday Pub Quiz: Week 248
700-pound George Floyd statue unveiled in US
Southgate explains why he didn't move Coke bottles like Ronaldo
Crystal Palace footballer is one of four British women suing Pornhub
'I made Tommy Robinson go viral, will you forgive me?'
Fans react to another disappointing Harry Kane display
You may also like
News
‘Growing evidence’ of Nepal variant in Portugal as tourists head back to UK
Travel
Mass brawl at Luton Airport leaves three in hospital and 17 arrested
News
Jet2 suspends flights until late June due to 'lack of clarity' from government
News
CEO of Ryanair predicts all travel restrictions will be removed by mid-June
News
Portugal to allow Brits in for summer even if they have not been vaccinated
Next Page