They say the guidelines will result in healthier adults

The World Health Organisation has released new guidelines that encourage severely limiting the amount of screen time children under five have each day. 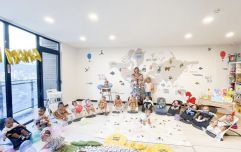 END_OF_DOCUMENT_TOKEN_TO_BE_REPLACED

They advise that children under two should have no screen time whatsoever and that three and four-year-olds should not play with iPads or watch television for more than an hour a day.

WHO say that for children under one year "screen time is not recommended," and that "when sedentary, engaging in reading and storytelling with a caregiver is encouraged."

For children aged three to four, screen time "should be no more than one hour; less is better."

The report is not just about decrying video games and television - WHO are more interested in making sure young children get more physical exercise - in particular, recommending "at least 180 minutes in a variety of types of physical activities" for three-to-four-year olds.

"What we really need to do is bring back play for children,” adds Dr Juana Willumsen, WHO focal point for childhood obesity and physical activity. “This is about making the shift from sedentary time to playtime, while protecting sleep."