When it comes to asking for a girl's number, you've got to learn no means no.

Sure, it can be brutal getting parred, but if they say they're not interested, you should call it quits. Don't be a prick.

And yet, many men are still of the opinion that hounding a woman for her number is going to get them somewhere.

Often women are forced to give a fake number or to tell them to please leave them alone. One woman, however, had a far more brutal way of dealing with a pest.

When Twitter user 'Sassafrantz' was asked for her number by an 'obnoxious guy', she decided to give it to him.

Except she didn't give him her number.


She just change his mum's contact details to her name, so he'd start messaging her instead. 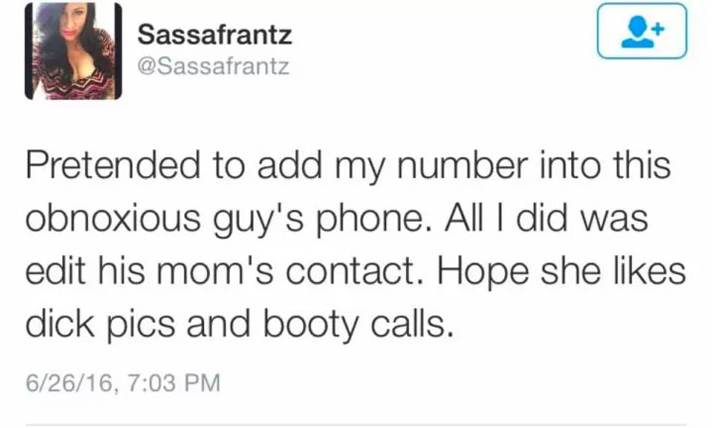 At least she'll know what kind of man her son is now.

The screenshot, originally posted on Bored Panda, clearly inspired a lot of people to share their own stories of warding off strange men.

And they did not disappoint.

"Back in the day we didn't have cell phones (yeah I am old) and so we could get really creative with phone numbers that we would give out to the creeps. My go to was the Planned Parenthood phone number."

While some users did take it upon themselves to defend the man, claiming that he did not deserve to be played this way, many others were of the opinion that the only victim was the bloke's mother.


popular
Buying your first house is about to get even more difficult
Manchester United agree terms with Inter Milan for Alexis Sanchez transfer
It was Pierre-Emerick Aubameyang's final but Emiliano Martinez's moment
A must-see Jurgen Klopp documentary on Channel 4 this evening
QUIZ: Can you identify the correct spelling of these brand names?
The Rock has bought the XFL for $15 million
A definitive ranking of every swear word from worst to best