There's a new smartphone app that claims to get you off the hook when you're having a sneaky pint.

The Bardis Teleporter app works by providing a soundboard of over 60 background noises to cover up the hustle and bustle of a pub when you get a phone call.

END_OF_DOCUMENT_TOKEN_TO_BE_REPLACED

So the next time you're having a sneaky pint and get a phone call from that someone special asking where you are, your friend can use Bardis to teleport you to another setting - be it the office, a bus, or even a builder's site.

Tracks covered. Bardis gives you more time for drinking. Or hightailing it out of there because you're half an hour late.

We downloaded the app and gave it a quick go to see if it could cover up the chaos that is the JOE office.

Designed by entrepreneur Richard Hardy, Bardis Teleporter works surprisingly well at covering up background noise when you're on the phone.

Certain noise effects like "vacuum cleaner" and "bus" are pretty convincing, helping you spin a yarn to whoever's calling that you're not on your fourth shandy down at your local. 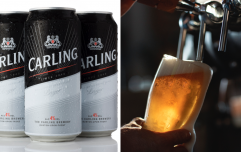 END_OF_DOCUMENT_TOKEN_TO_BE_REPLACED

Even better, Bardis Teleporter is currently free to download on both Android & iOS - making it a fun little distraction just before Euro 2016 takes up all of your pub time.

Just make sure you hit the right sound effect when your mate is lying down the phone. You don't want to be playing a vacuum cleaner when they're meant to be on a bus, eh?