Jeremy Corbyn is a busy man.

The leader of the UK's Labour Party has just watched his country vote to leave the EU and change Prime Minister - seemingly out of the blue. 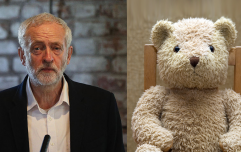 END_OF_DOCUMENT_TOKEN_TO_BE_REPLACED

He's also being challenged for the leadership of his own party by colleagues such as Angela Eagle, less than a year after taking over as leader.

With that in mind, it's fair to say that the Islington North MP might not have that much time to stop and play Pokemon GO with the BBC.

This hilarious video shows one reporter filling Corbyn in on how to play the new app. Corbyn, for his part, does his best to look interested before offering the assessment "We caught Krabby, okay. So our work this morning has not been in vain."

BBC introduces PokemonGo to Corbyn:
"we caught krabby? ok, so our work this morning has not been in vain..."
😂 pic.twitter.com/RCYCuPjxrh