Watch as man and pigeon collide on high-speed rollercoaster

Admittedly, you've probably never lay away at night wondering what would happen if a pigeon flew directly into the path of a high speed rollercoaster.

Thankfully, a few short seconds after reading this writing (even sooner if you've just ignored it and scrolled down for the video) you'll know exactly what that looks like. 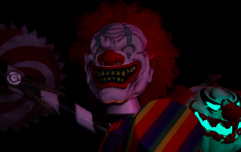 How to overcome your worst fears

END_OF_DOCUMENT_TOKEN_TO_BE_REPLACED

The video comes from Spain, soon after the opening of new theme park, Ferrari Land.

The footage goes back in slow motion, so you get to see the unfortunate man that takes a pigeon to the face go through the full rollercoaster of emotions (geddit?) as it slowly dawns on him what has just happened.

From what we can gather, the collision is enough to kill the pigeon, leaving a tidy old spattering of blood on the unfortunate (but slightly more fortunate that the pigeon) man.

As he trie to process what the actual fuck just happened, he realises the lifeless bird is being held under his neck by the G-Force of the ride. After tossing it away, he attempts to explain what had just happened to the bloke next to him before swiftly getting back to enjoying the ride.

Quite the video, this...