The year of VR is upon us, and with any technological revolution comes the hilarious videos of dads doing their utmost to keep up with the times.

This video features three glorious minutes of a dad getting his first virtual reality experience with the Samsung VR headset. 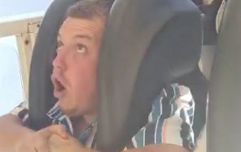 END_OF_DOCUMENT_TOKEN_TO_BE_REPLACED

Obviously, there is literally no way that anyone can look less than awkward in one of these things. But there is just something so brilliant about a bald man with a northern English accent fumbling around his kitchen, occasionally issuing a thumbs up of approval to his virtual playground.

The language is a bit NSFW, so remember the earphones for this one.

This surely has to be Samsung's new marketing line.

popular
Lisa Kudrow hits back at fans complaining about lack of diversity in Friends
James May 'hospitalised after crashing into wall at 75mph filming new show'
Landlord faces £40k fine after tenant puts swimming pool on roof of flats
Ex-teacher who got pregnant by former student plans to film birth so it can be taught in schools
The JOE Friday Pub Quiz: Week 307
Robin Williams' wife shares reason why he killed himself
Groom shocks wedding by playing video of his bride cheating with her brother-in-law
You may also like
Entertainment
Ricky Gervais' home town has named a rubbish truck after him and he's not down in the dumps about it at all
Life
'Moron' caught on video flooring himself with wild sucker punch before walking off
Entertainment
The Chase star Bradley Walsh can't control his laughter after the most NSFW answer ever
News
Sky News presenter causes chaos with epic 'Jeremy C*nt' blunder during live segment
Entertainment
Jared Leto shares hilarious video reaction to viral Morbius memes
Next Page