Stars from film, TV and radio are joining together in a new campaign to try and break the stigma around mental health.

#1in4 is a new campaign from the BBC, focused on getting people to talk about mental health. One in four people will affected by mental health issues, but some people still feel like they can't talk about what they're going through.

The campaign centres around famous faces sharing selfies with four fingers held up, accompanied by "words of solidarity, many from personal experience, with the hope of encouraging their fans and followers to do the same," a press release said.

A host of celebs have already joined the campaign.

#1in4 of us will experience mental health issues. Don’t ignore your symptoms. I'm helping @bbcthree to encourage everyone to talk w/o shame. pic.twitter.com/Z2vCVFhzRl

#1in4 of us will experience mental health issues. Be there for your friends. @BBCThree pic.twitter.com/vdMz9zsWWJ


#1in4 of us will experience mental health issues. It's OK to ask for help. We've joined up with Tom Hardy to fight stigma and shame. pic.twitter.com/00DDLCNrwh 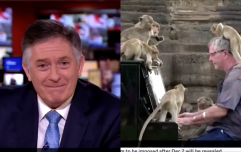 END_OF_DOCUMENT_TOKEN_TO_BE_REPLACED

"I wanted to get involved with the #1in4 campaign to help people realise they're not alone. Having mental health issues is nothing to be ashamed about."

The #1in4 campaign is part of the BBC's Minds Matter season, featuring a rang of programming, including The Truth About Stress on BBC One, Horizon: No Such Thing As Schizophrenia on BBC Two and Being Black, Going Crazy on BBC Three.

popular
The JOE Friday Pub Quiz: Week 232
Aldi announce new packaging ban to come into action across supermarkets nationwide
Scarlett Moffatt Discovers ‘30% Rain’ On Weather App Doesn’t Mean Chance of Rain
Slowthai agrees to stop spitting in fans' mouths at gigs due to Covid-19
Making your bed is actually bad for you, doctor claims
A definitive ranking of every swear word from worst to best
Prince Harry praises Netflix's The Crown, says it's "loosely based on truth"
You may also like
Entertainment
BBC would cost nearly three times more than Netflix as subscription service, says Tim Davie
Entertainment
Why the BBC needs to stand for backing black comedy
Entertainment
Mrs Brown's Boys to continue until at least 2026, Brendan O'Carroll confirms
Entertainment
BBC Radio 1 says it won’t play original version of Fairytale of New York this Christmas
Entertainment
BBC confirms Line of Duty Season 6 will air by March 2021
Next Page