When you feel different, whether it be because you are bi, gay, or trans, it can be a very difficult process to finally accept yourself.

Once you've done that, you then have to tackle another obstacle which is telling your family. Some people never do because they know it won't be accepted. On the other hand, many people are lucky to have relatives and friends who embrace their news with a kind and open-minded outlook.

This is exactly what happened to Twitter user and writer Aoife Martin when her sister told her that she saw a photo of her as a woman.

Her sister's response is so lovely and accepting - it's ok to get a little bit teary. 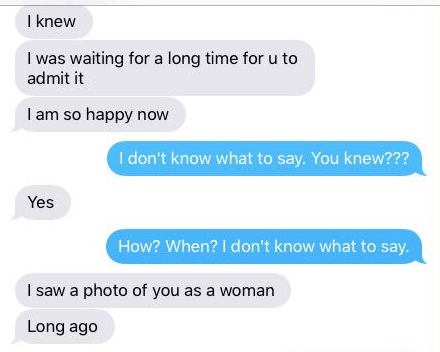 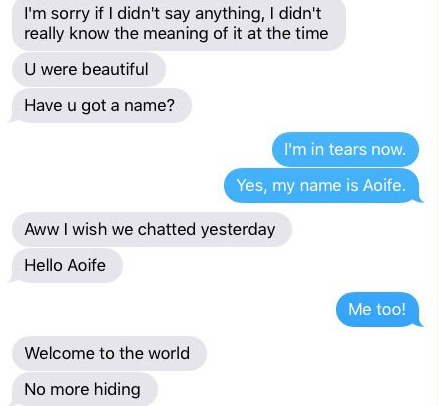 JOE contacted Aoife about her journey, and this is what she told us:

"I've been trans for as long as I can remember, long before I even knew the word existed. My earliest memory is, at probably around 4 years of age, trying on a skirt and knowing that somehow it felt right. I also realised early enough that it was not the done thing. This was '70s Ireland so it was not something that was understood or accepted. I learned very early on to hide it.

"So I grew up feeling guilty and ashamed and determined to fit in. I was always attracted to girls so the fact that I wasn't gay made me think (hope) that this was something I would be able to overcome.

"Fast forward a few years. I got married, settled down and had kids. I did tell my wife before we were married as I didn't think it would be fair going into a marriage without being honest. So, for the length of my marriage I was able to compartmentalise my gender identity and put it to one side.

"Then, a few years ago, my wife and I separated and my gender identity suddenly became important. I was on Twitter at the time and came out to a some close friends there. They were so accepting and lovely and when I met them in real life they accepted me for who I was.

"Then last year, just after Christmas I came out to all my followers on Twitter. I started seeing a counsellor and I came out to my GP. All of these little steps were a culmination to coming out to my sister yesterday. I could not have hoped for a better response. I'm still not fully out to everyone in my family but I'm just taking it one step at a time."

popular
Antonio Cassano reveals Cristiano Ronaldo ordered him to 'respect' his achievements
'Super recogniser' draws 'accurate' modern Maddie McCann to help police find her
Mum in jail for murder pays tribute to son, 6, killed by his dad and new girlfriend
Chilling video shows moment step mum tried to get away with murdering boy, 6
Jack Wilshere could be set to resume career with National League Wrexham
The JOE Friday Pub Quiz: Week 272
'I did three grams of coke during a game': Inside football's problem with Class A drugs
You may also like
Sport
Qatar World Cup chief executive claims LGBTQ community will be 'welcome' at tournament
News
Marks & Spencer introduce staff pronoun badges to be more inclusive
Sport
Chelsea's Pernille Harder on the importance of using her platform to express her values
Sport
Newcastle LGBTQ+ group defend statement, say they were put in 'impossible position' by Saudi takeover
Entertainment
Netflix suspends trans employee who criticised Dave Chappelle special
Next Page