It's payday for a lot of people this week, so you may well find yourself in a pub or club at some stage, progressively throwing financial caution to the wind with every passing round.

We've all been there. You run out of cash, so around 1am you decide it's a great idea to head to the bar to order a rake of shots for all your mates, and pay by card.

END_OF_DOCUMENT_TOKEN_TO_BE_REPLACED

The next morning you come round, only to groggily find receipts in your wallet and pockets that make you want to crawl back under the covers and die.

Of course, if you've been gambling beforehand that evening - say, betting on a match, or at the races - and your ship has come in, you're in even more danger of waking up with the bar tab from hell the next morning

Well, spare a thought for the poor creature who won at the Galway Races on Wednesday, and then went to celebrate in The Front Door bar in Galway city. 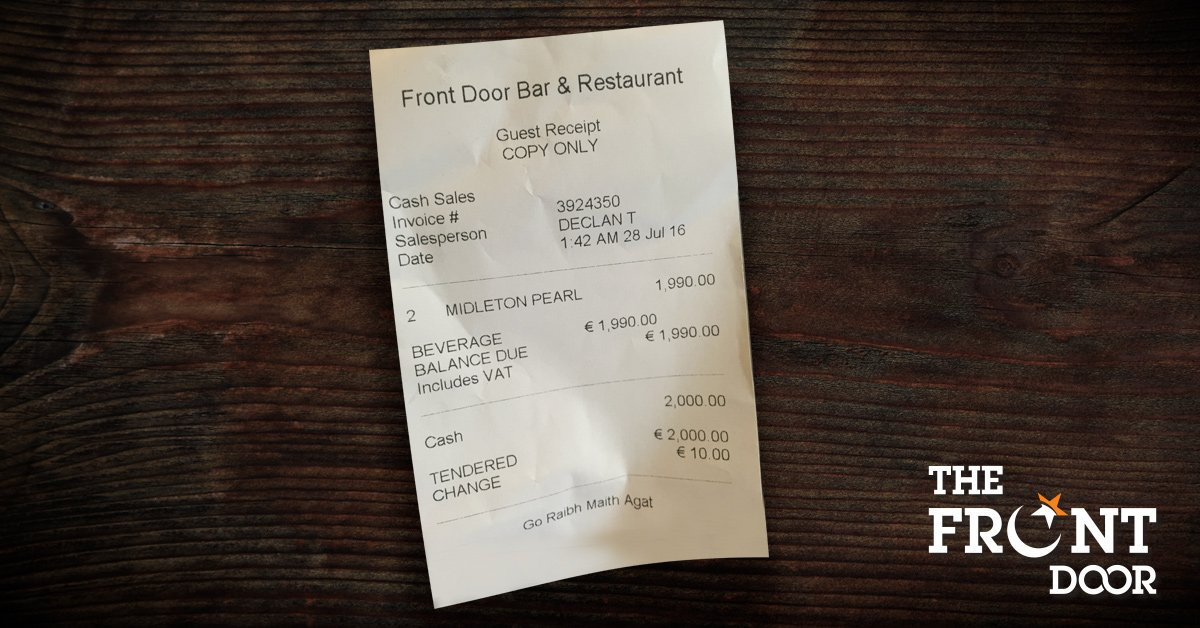 According to the Independent, the lucky winner - they remain unknown so far, as does the amount they won - celebrated by ordering two glasses of Midleton Pearl Very Rare 30th Anniversary whiskey.

Anyway, you'll notice that the transaction was made at 1.42am on Thursday morning, indicating that the punter may have been potentially well-oiled at that stage. Sure, wouldn't a rare glass of whiskey seem like a great idea to all of us at that point of the night?

We must also salute barman 'Declan T' for his potential role in the affair - we hope he works on commission. Or at least got a decent tip.

We hope the mysterious whiskey-quaffer comes forward (and buys us a round).

Maybe it's this dude, for whom money is clearly no object?

Where is the money going? On face wipes... this punter using a €50 to wipe his face #galwayraces @paddypower 😂 pic.twitter.com/Wi28jQ3T2q

popular
Landlord faces £40k fine after tenant puts swimming pool on roof of flats
Graeme Souness under fire for calling football a ‘man’s game' while sat with Karen Carney
Comedian cancelled after ‘getting his penis out on stage’ during Edinburgh Fringe Festival
Incredible case of the only known individual whose parents were two different species
Man 19 years older than his wife shocked to learn he had met her when she was a baby
Man with laughing condition like The Joker accused Joaquin Phoenix of stealing his persona
JK Rowling told 'you are next' after stabbing of acclaimed author Salman Rushdie
You may also like
News
Straw poll divides opinion
News
Man shows aftermath of crazy waterslide jump which went viral
News
The horrifying reality of what the last selfies on Earth will look like, according to AI
News
Karen's Diner apologises after waiter called customer a 'pedo' and an ‘OnlyFans tart’
Social Media
Fisherman fights shark as he tries to get his finger back- 'I lost my goddamn pinky'
Next Page