Warning: this optical illusion may 'break your brain' for hours

Named after the American psychologist who discovered it, the McCollough Effect is the reason that white/blue dress went viral last year.

By staring at a test grid of red and green lines then staring at similar image in black and white you can trick your brain into seeing red as green and green as red – sometimes for up to two months! 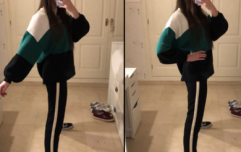 END_OF_DOCUMENT_TOKEN_TO_BE_REPLACED

Whatever you do, don't try this at home for more than 15 minutes. Things might never be the same again. At least it's one way to get out of a ticket for running a red...

Step 1: Stare at these images for five minutes, alternating between the two

Step 2: What colours do you see here?

popular
Man who died in cliff accident named as former footballer Mourad Lamrabatte
Jesse Lingard's Mark Noble tribute angers Man United fans
McDonald's to exit Russia after more than 30 years in the country
The FootballJOE Pub Quiz: Week 37
Pirates of the Caribbean creators are not ruling out Johnny Depp's comeback despite trial
Andreas Christensen refused to play in FA Cup final against Liverpool
Zlatan Ibrahimovic smashed window of AC Milan bus while greeting fans
You may also like
Weird Britain
You probably don't know what colour traffic lights really are
Social Media
Everyone is baffled by this optical illusion showing numbers differently
Life
People can’t figure out if this is a picture of a wall or a river
Life
2017 has its first viral optical illusion
Life
This photo of some ham will ruin your day, week and life
Next Page