In case you didn't know, you can get breakfast at Nando's – but only at one of its restaurants

If you're like us, you'd probably eat Nando's peri-peri chicken for breakfast, lunch and dinner.

We would have no qualms at all about tucking into an extra-hot butterfly chicken and some fino sides to start the day.

END_OF_DOCUMENT_TOKEN_TO_BE_REPLACED

But if spicy chicken isn't quite your thing at 6am in the morning, there's one Nando's restaurant in Britain where you can actually have something along the more traditional breakfast lines.

We don't know how the hell it has escaped our attention, but the Nando's at Gatwick Airport has a breakfast menu. No you didn't read that wrong - it has an actual BREAKFAST menu.

Not only is Gatwick the cult chicken chain's first airport restaurant in the world, but it's the only place you can get their extra special breakfast offerings in Britain.

We're not going to lie, it looks absolutely incredible... 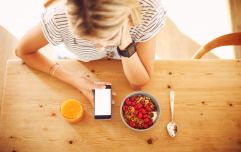 There's a nasty side effect when you don't eat breakfast

END_OF_DOCUMENT_TOKEN_TO_BE_REPLACED

Nando's says on its website that it is pioneering menu choices like Spiced Maple Pancakes and Spiced Maple French toast.

Don't pretend you wouldn't smash several of those before getting on a flight to Portugal.

They also do two omelettes including Chicken and Fresh Herb, and Spinach, Tomato and Cheese.

On the 7th day, God made Nandos Breakfast pic.twitter.com/CNr2gDjq1F

How are people still harping on about McDonald's breakfast when you can get this sort of scran on our Sceptered Isle?

It seems we're not the only folk to have only just got the memo...

Nandos at Gatwick Airport has a breakfast menu??? I'm all over that.

My new faveourite airport is Gatwick 🐷 has just flopped a nandos after sleeping in for breakfast 🙈 @RochdaleHornets pic.twitter.com/IGa744zyv5

all in favour for nandos to open early or start some sort of breakfast menu ???

In Nandos for breakfast, what the fuck

my god we're having a nandos breakfast pic.twitter.com/gUb0Dpxb75

You can get the breakfast at Nando's' Gatwick South Terminal Airside outlet from 4am to 11am every morning. It's worth booking a flight to anywhere just to be able to try it out.