If, like most men, you hate the thought of Christmas shopping, you may not have to bother.

For about the fourteenth time this year, some are claiming that the world is set to end...this time in December, meaning there's no point hitting the shops to buy presents. 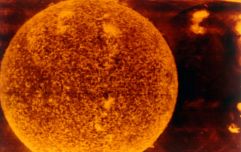 END_OF_DOCUMENT_TOKEN_TO_BE_REPLACED

According to paranormal 'news' site, BeforeIt'sNews, the Earth is set to be obliterated as it smashes into another planet, named Nibriu.

Nibriu, for those that aren't in the know, is supposedly a 'missing planet' that many have claimed will one day collide with Earth, ending life as we know it.

But if reports on the same site are to be believed, 40 million of us may not even make it through the weekend with a continent-splitting mega earthquake set to trigger huge tsunamis this weekend.