There are 158 new emojis available on the latest iOS update

We all love emojis

They allow us to express ourselves without using words, which can be a tiresome exercise. Sometimes, typing out something as long as "ok" can be more hassle than it's worth. Thankfully we have the option of the 'ok' emoji, or even the thumbs up, depending on your mood. 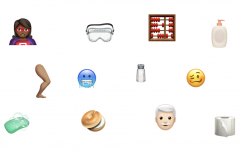 END_OF_DOCUMENT_TOKEN_TO_BE_REPLACED

If something is good, like really good, a simple 'fire emoji' will suffice as an descriptive exclamation. Describing emojis has even crept into the common lexicon. 'That was pure fire emoji', you might say. Maybe.

If this sounds like you, and you have an iPhone, then we have great news for you, because with the new iOS 12.1 update, there will be 158 more for you to choose from.

Some would say there are only 70, but including every skin tone and gender, the number rises to 158.

The new options include 'smiling face with three hearts', 'cold face' and 'woozy face', which resembles a Salvador Dali painting. Gingers are finally getting their own emojis

END_OF_DOCUMENT_TOKEN_TO_BE_REPLACED

You've also got a range of superhero emojis and more sporting equipment to include in your Instagram captions. Finally, someone is thinking of those poor Lacrosse players who have thus far had to type out the whole word.

The full list can be viewed here, on emojipedia's blog.

popular
'I did three grams of coke during a game': Inside football's problem with Class A drugs
Patrick Vieira appears to kick fan after Everton defeat
Johnny Depp's lawyer Camille Vasquez responds to romance rumours
Man United cancel end of season awards after player requests
Amber Heard's acting coach explains exactly why she believes her tears are real
Johnny Depp's attorney Camille Vasquez revealed to be dating Brit
'Wow, hats off to her! Sick remark from Bobbi Anne McLeod's killer after she survived 12 hammer blows
You may also like
News
Pregnant man and biting lip emojis coming to iPhone this week
Tech
Apple have released 100 new emojis today including the one people have been waiting for
Tech
You can now have a say on which emojis you want added to your phone
Life
72 new emojis are on the way including 'selfie', 'facepalm' and 'bacon'
Life
Nobody can agree on an answer to this head-melting monkey emoji question
Next Page