Have you ever tried this?

One of the most common methods iPhone users employ in an effort to save battery doesn’t actually work, according to a high-ranking Apple official.

If you’re an iPhone user, chances are you’ve quit all of the apps in your multi-tasking feature in an effort to save battery life. It would seem to make perfect sense in fairness.

END_OF_DOCUMENT_TOKEN_TO_BE_REPLACED

But according to Craig Federighi, Apple’s senior vice president of Software Engineering, it doesn’t make any difference.

Although he was a little light on details, he was fairly upfront in his opinion on the matter.

Federighi provided a response to an email sent by a reader of influential Apple website 9to5Mac to Apple Ceo Tim Cook inquiring whether he quits his multi-tasking apps as a method of preserving battery life.

Cook didn’t respond, but Federighi did (the e-mail below has been verified by 9to5Mac) with a blunt but unambiguous response. 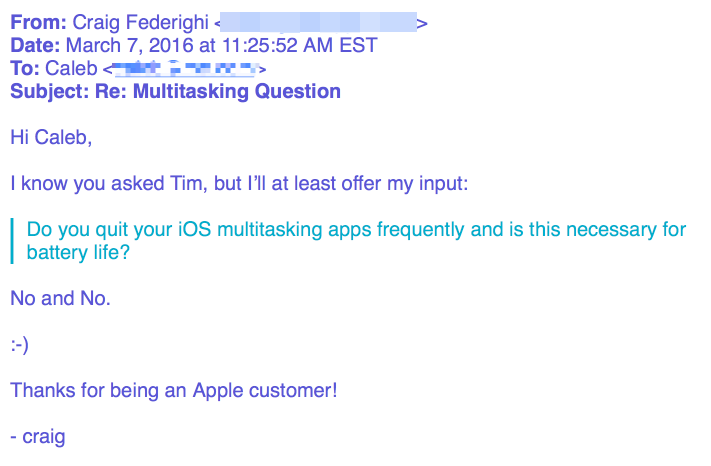 popular
Mum in jail for murder pays tribute to son, 6, killed by his dad and new girlfriend
Chilling video shows moment step mum tried to get away with murdering boy, 6
The JOE Friday Pub Quiz: Week 272
Man suing company after being 'hung upside down like meat' at Christmas party
Bride faints on groom, vomits and gets pooed on during ceremony
Petition to stop interviewing Will and Jada Smith has hit 15,000 signatures
Bomb squad rush to A&E after man arrives with WW2 artillery shell up his bum
You may also like
Tech
Tesla announces electric Cyberquad for kids
News
Musk sets out UN conditions for $6B Tesla stock donation to end world hunger
News
People are baffled why billionaire Zuckerberg uses a bottle of BBQ sauce as a bookstand
News
Woman 'has proof' extra iPhone cameras are fake
Sponsored
Everything you need to take your streaming set-up to the next level
Next Page