Grab your mates and make plans.

Halloween is over and you know what that means...Christmas is coming. Actually, it doesn't because the Christmas decorations and memorabilia in shops is getting earlier and earlier with each year but even Scrooge himself would enjoy seeing the Coca-Cola truck passing by his house. 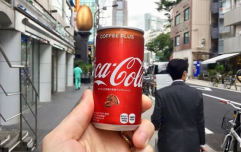 Brace yourselves... COFFEE Coca-Cola is on the way

END_OF_DOCUMENT_TOKEN_TO_BE_REPLACED

As is the norm, the lorry will be touring around the UK and its voyage starts in Glasgow on 11th November.

Don't worry though because the festive cheer is going to be spread to 42 locations across the UK.

If you want to see if your city is on the travel itinerary, you can do so here.

Aedamar Howlett, marketing director for Coca-Cola Great Britain, said: "Coca-Cola is synonymous with the Christmas season and it's no secret that our much-loved Christmas Truck Tour marks the unofficial countdown to Christmas. We can't wait to start spreading holiday cheer and we are excited to announce a brand new route for 2017 - which brings a sprinkling of festive magic to fans across the UK."

This being said, in Liverpool, there have been calls to ban the truck from visiting the city. The city’s Liberal Democrat party believe the Coca-Cola event should not take place because Liverpool "is in the grip of an obesity epidemic".

According to the Liverpool Echo, Councillor Richard Kemp wrote a letter to the local shopping centre which will be hosting the event. In that letter, he objected to the Coke truck visiting on the grounds that children already consume too many sugary drinks.

popular
Pizza Hut customer outraged over 'sexual' ketchup label that reads 'shake, squeeze and squirt'
How did Brian Laundrie’s parents find his remains in a few hours?
The JOE Friday Pub Quiz: Week 266
Taliban 'behead junior volleyball player and post photos of her head on social media', report says
Protesters gather outside Premier League HQ to call for an end to Saudi involvement in football
St James' Park to get new name under Newcastle new owners
Alec Baldwin asked 'why was I handed a loaded gun?' after fatal on-set shooting
You may also like
News
UK faces Diet Coke shortage due to Brexit
Sport
Xhaka necks a bottle of Coke before penalty shootout victory against France
Football
Heineken will no longer appear in front of Muslim players after Pogba causes rule change
Football
Yarmolenko asks Coke and Heineken for sponsorship at press conference
Football
Southgate explains why he didn't move Coke bottles like Ronaldo
Next Page